We all remember our favourite bedtime story as a child, but what’s out there for children today? Wouldn’t it be great if they could read stories that encouraged acceptance and helped to eliminate prejudice in our society?

That’s the aim of Truth & Tails. Written for children aged five to eight, this series of storybooks celebrates the diverse world we live in through the lives of loveable and relatable animal characters. The tales look at concepts such as self-esteem, gender and disability, written in a way that children can understand these sometimes complex topics. 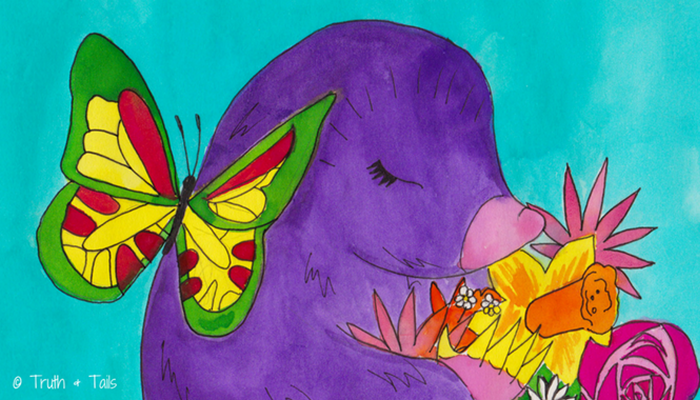 Molly the Mole, Truth and Tales

What inspired you to write the Truth & Tails books?

A couple of years ago, I was having a conversation about my favourite children’s books and I noticed that there was a definite theme emerging. The books that stayed stuck in my head from a young age through to adulthood were the ones that taught me the most valuable lessons. It got me thinking that there should be books that provided a straightforward, sensitive way to explain complex yet common issues like self-worth, racism, gender, and disability to young children. Then I thought, hang on, maybe I can write those books! I’d met Phoebe a couple of months previously at an event for creatives, we’d clicked straight away and I loved her illustration style so I ran the idea by her and she loved it – so Truth & Tails was born. We believe that by proactively addressing important issues with children from the moment they’re old enough to notice them and ask questions, we can instil a strong sense of understanding, empathy, and acceptance of those who are different that carries through to adulthood.

How did you come up with the name Truth &Tails?

We came up with the name almost immediately, along with the idea for Vincent the Vixen which was the first story we planned. Vincent’s story is about a fox who was born a boy, then realises she’s actually a girl fox. That’s why the logo looks like a fox’s tail, in homage to the first character we ever created. The name is important because it reflects what we stand for: “Truth” because we stand for being honest with children from the moment they’re old enough to start asking questions, and “Tails” because we use animal characters (most of which have tails!) in all our stories. 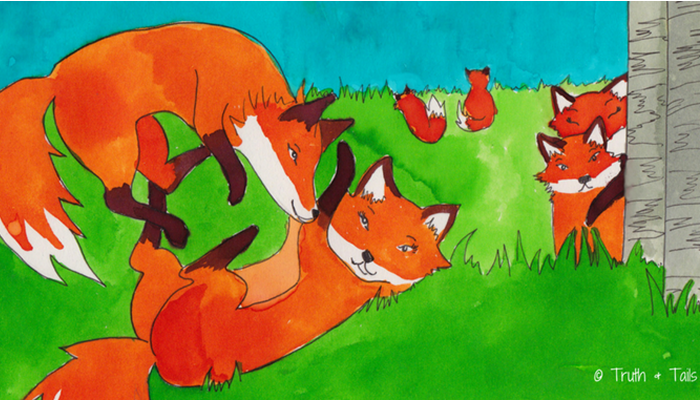 Vicent the Vixen, Truth and Tails

What made you decide to use animals in your stories?

I’ve always loved stories about animals. Some of my favourite books when I was a kid were Fantastic Mr Fox by Roald Dahl, Charlotte’s Web by E.B. White and The Sheep Pig by Dick King-Smith. And of course, like many children over the last hundred years, I had most of the Beatrix Potter stories too. All these books taught important lessons using animals. Also, within the same week that I’d had the idea for Truth & Tails, I read an article in The Guardian called Green eggs and tofu? – in praise of pigs in children’s books written by children’s author Harry Oulton. We have a quote from the article on our website because we loved it so much: “The ability to understand what it’s like to be someone else is the goal of all good fiction, and that’s a unifying aim, not a divisive one. After all, what better way to make me, the reader, feel the same as someone from a different country, faith or gender, than by making both of us picture ourselves as a fox desperately digging to escape three farmers who have sworn to kill him?” This encapsulates perfectly what we’re aiming to do with Truth & Tails.Truth and Tails.

Your font is quite distinctive – can you tell us more about it?

We wanted to use a font that appeared friendly, and looked more like handwriting than print but was easy to read. All of Phoebe’s illustrations are drawn and painted by hand, so we wanted a font that would match them well. We trialled a few and asked peoples’ opinion before settling on this one. We’ve also had feedback from teachers that it’s an easy font for most children to read, which is brilliant.

How do you approach writing a new book – what research do you do?

It depends on the story. Molly the Mole was the first book I wrote, because it came the most naturally to me. I drew a lot on my personal experience of having low self-esteem as a child, then discovering in later life how to appreciate my self-worth through the wonderful relationships I have with my friends and family. Carlos the Chameleon, our third book, was also a personal one as it deals with the concept of changing who you are to fit in with others and the eventual realisation that, in fact, people love you exactly the way you are. The other two books, Vincent the Vixen and Roxy the Raccoon weren’t as straightforward as they dealt with more sensitive issues. After writing them, we sent drafts to people who had been through the experiences of our characters, and in doing so we discovered biases and presumptions that we didn’t even know we had. Writing these books was a valuable learning experience for us, and we’ve since shared openly the mistakes we made and the misconceptions we communicated in the first draft of Vincent the Vixen, in the hope of contributing to a more accepting, understanding culture around gender identity. 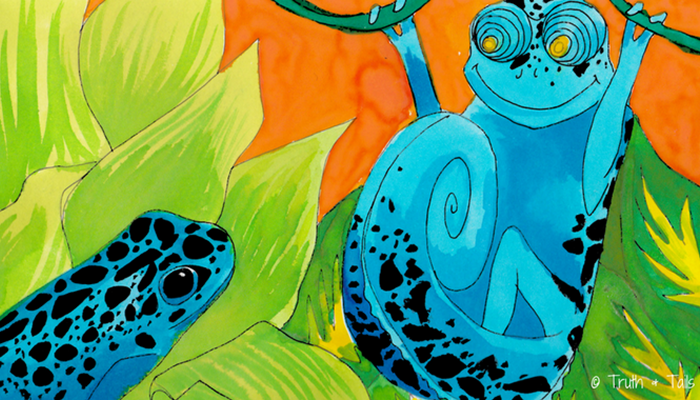 Carlos the Chameleon, Truth and Tales

You’re taking your books into schools now. How have children been reacting to the stories?

It was fantastic to be given the opportunity to take our books into a local school. After gaining so much lovely feedback from individual friends and family, it was wonderful to see a whole group of children enjoying the stories together. We started off with an assembly about authors and how to make a book, which had a lot of audience participation, then I read the story to the children as part of a lesson. When I finished reading Carlos the Chameleon to the children in years Reception, 1 and 2 they all asked for me to read it again – so we read it twice!

What was your favourite book as a child?

I read constantly as a child, but a book that I’ve kept and still revisit to this day is Amazing Grace by Mary Hoffman. It’s about a girl called Grace who loves dressing up as different characters and wants to be Peter Pan in the school play, but her friends tell her she can’t because she’s a girl and she’s black – and Peter Pan wasn’t either of those. She goes home and tells her nana, who shows her she can be anything she wants to be and says not to let anyone else tell her otherwise. So, she plays Peter Pan, she’s totally awesome, and everyone tells her how amazing she is! Now that I think about it, the book was published in 1991 so it was genuinely ground-breaking for its time in tackling race and gender in the way it does.

What’s next for Truth & Tails?

More books! We’re planning on taking some of the supporting characters that feature in our existing four books and telling their stories. We also want to publish a colouring book, and we’ve got some exciting collaborations in the pipeline for some Truth & Tails merchandise. We’ve created characters that people love and connect with, so we’re excited to see where we can take them next.

Thanks, Alice for talking to us! Truth & Tails books and merchandise are available to buy here: www.truthandtails.com/shop. You can also keep up-to-date with what Alice and Phoebe are doing next by following Truth & Tails on Facebook, Twitter and Instagram.

What was your favourite story as a child? Let us know in the comments below.

Mapping the Creative Economy around the Durga Puja